The CCC In DeSoto State Park 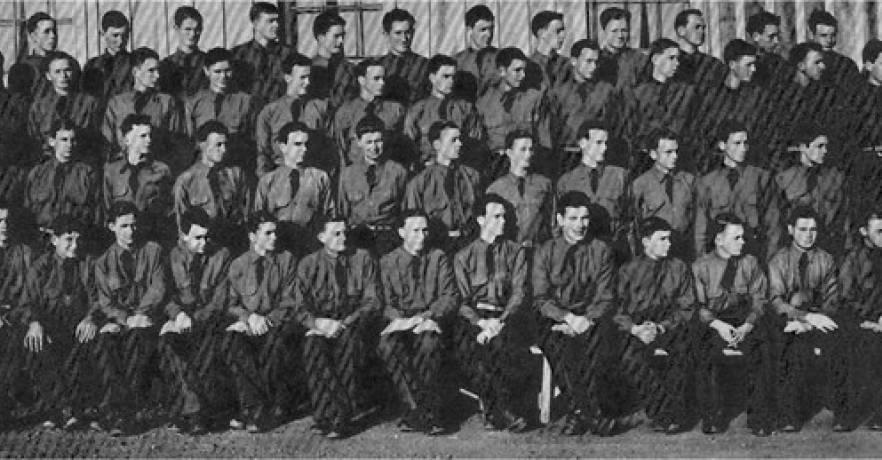 The Civilian Conservation Corps (CCC) was a government- made work program during the Great Depression, a time of great suffering worldwide where jobs, money, & food were scarce. The CCC was developed as part of President Franklin Roosevelt’s New Deal, which was designed to bring relief to millions of unemployed Americans. Few Depression-era work programs matched the success of the Civilian Conservation Corps.; the CCC contributed to the preservation, improvement of fish and wildlife habitats, as well as the reforestation of thousands of county, state, and national forests, parks and campgrounds. The CCC taught valuable skills to these young men and provided America with trained, skilled labor when they left the CCC. All the hard work and effort of the Civilian Conservation Corps is still visible in many places throughout DeSoto State Park today. The CCC built roadways, trails, trailside shelters, DeSoto State Park’s Lodge, large picnic shelter, cabins, and even helped locals on several projects & buildings in the area.

"Brother, Can You Spare A Dime?"
The stock market crash of October 29, 1929 forever silenced the prosperous era known as the "Roaring Twenties". The constant cycle of borrowing and spending to finance small farms and big corporations turned to foreclosures on homes, farms, and businesses as banks failed and life savings vanished. The sounds of progress were swept away by the brutal winds of the prairie as the men and women who operated the machines of industry lost jobs by the millions. This ushered in the era known as the "Great Depression”. Food from bread lines and soup kitchens did little to ease persistent hunger pains. The only solution for restoring the pride and dignity of supporting one's family was sustained employment. But who was hiring?

“I pledge myself to a new deal for the American people. This is more than a political campaign. It is a call to arms.”
New York governor, Franklin D. Roosevelt, ran for president during the 1932 election with the promise of a “New Deal” for the American people. At his inauguration in March 1933, Roosevelt declared in his lilting style,"Let me assert my firm belief that the only thing we have to fear is, fear itself — needless, unreasoning, and unjustified terror which paralyzes needed efforts to convert retreat into advance." In his first 99 days, he proposed, and Congress swiftly enacted, an ambitious "New Deal" to deliver relief to the unemployed and those in danger of losing farms and homes, recovery to agriculture and business, and reform.  His idea was to put Americans to work under government-run programs, often referred to as the Alphabet soup Administration because of all the acronyms. Some of the programs were:
WPA -Works Progress Administration-built roads, government buildings, airfields, schools, etc.
CWA-Civil Works Administration- gave the unemployed jobs building or repairing roads, parks, airports, etc.
TVA-Tennessee Valley Authority-built dams and hydroelectric projects to develop the South and to control flooding
REA-Rural Electrification Administration-ran power to the rural areas where it was too expensive for private companies to serve
CCC-Civilian Conservation Corps- development & conservation of natural resources, construction of parks, erosion control, etc.
Some agencies of the New Deal were more successful than others, but each was meant to help bring the nation back to its feet. Although each program contributed to the effort, it took entering the World War to revitalize the American economy.

The CCC is Formed

In the first days of President Franklin D Roosevelt’s term, later known as the ‘First 100 Days” he set to work immediately by calling Congress into session; he then proceeded to drive a series of bills thru that was to reform the U.S. banking industry, save American agriculture and allow for industrial recovery.
Within a month after Roosevelt outlines his ambitious jobs-creation proposal, Congress acted upon the President’s recommendation and passed a law creating the Civilian Conservation Corps (initially called the Emergency Conservation Works). Probably no other New Deal program instituted by Roosevelt proved as popular and successful.
With Legislation in place, the president moved ahead. In April 1933, he appointed Robert Fechner as CCC director and established an advisory council of representatives from the departments of labor, war, interior, and agriculture. The council would oversee the program and provide a forum for discussing policy issues. The Labor Department was assigned responsibility for recruiting youths and the War Department (Army) was in charge of enrollee administration, transportation, housing, food, clothing, supplies, medical care, education, discipline, physical conditioning, and recreational activities. The departments of interior and agriculture selected the located of the conservation work camps and supervised the actual labor. By most accounts, the CCC was one of the most popular New Deal programs, beloved by the American people. It just may have set a record for the short time between idea and implementation.
The speed with which the plan moved through proposal, authorization, implementation and operation was a miracle of cooperation among all branches and agencies of the federal government.  It was a mobilization of men, material and transportation on a scale never before known in time of peace.

"The slogan of the Civilian Conservation Corps is 'We can take it!' Building strong bodies is a major CCC objective. More than half the enrollees who entered CCC the last year were seventeen years of age. Work, calisthenics, marching drill, good food, and medical care feature the CCC health program."
~ Wilfred J. Mead, Civilian Conservation Corps enrollee
With Legislation in place, the Civilian Conservation Corps enrolled its first enrollee April 8, 1933 and by July 1st there were 1,463 working camps with 250,000 junior enrollees, 28,000 veterans, 14,000 American Indians, and 25,000 LEMs (Local Experienced Men)
The CCC required an enrollee to be an unemployed, single male with an age range of 18 to 25 years. He had to be a US citizen, and had to have family dependents at home to send a mandatory allotment home each month. Each enrollee had to go thru a selection agency, and, upon passing a physical exam, was required to serve an initial 6 month period with an option to serve as many as 4 periods or up to 2 years. Since some enrollees were getting their first set of new clothes in their lives and 3 square meals a day, most stayed as long as they could.
Enrollees worked 40 hours a week over 5 days, sometimes including Saturdays is poor weather dictated. In return they received food, clothing, and medical care, as well as $30.00 a month, with an allotment of $25.00 required to be sent home to their families.
Enrollees became experts with trucks, tractors, bulldozers, jackhammers, and draglines, as mechanics, carpenters, masons, lumbermen, and surveyors. Other training included working with rock, both in quarrying and the construction of masonry walls, road construction, the use of burners and chemicals for weed control, and the shaping of lumber for timber structures. In addition to the many construction skill gained, the CCC men learned camp-support skills such as clerical duties, cooking, & baking. Enrollees were eligible for "rated" positions to help with camp administration: senior leader, mess steward, store keeper and two cooks; assistant leader, company clerk, assistant educational advisor and three second cooks. These men received additional pay ranging from $36 to $45 per month depending on their rating.

In 1933 considerable effort on the part of the local government and business officials was put into obtaining a Civilian Conservation Corps camp in Dekalb County, Alabama. In those lean times, a CCC camp meant much to the local economy in the way of local supplies and food being purchased for the camp, as well as the opportunity for jobs. Once the decision had been made to locate the camp in Fort Payne, a location was selected for the main camp on a baseball field on the South end of town. A more urban location was selected because of the availability of electricity and other utilities, as well as the local shopping and recreational activities for the enrollees. A small group of enrollees arrived in the late Fall of 1933 and began preparations for the entire company that arrived later. By the time the entire company arrived and the camp barracks and other structures were completed, the forestry service had finished preliminary plans for a park near Mentone, located on Lookout Mountain. By April of 1934, the project was named State Park #5, which later came to be known by the locals as DeSoto State Park.

Initial acreage was around 950 acres that was mostly donated by the local residents. Some of the first work that was done by the enrollees of Company 472 was constructing a fence around the entire park area, grading roads, clearing hiking trails, planting trees, and also building structures such as bridges, culverts, cabins, and a group lodge.

Gradually the park took shape, with the ‘CCC boys’ constructing and improving roads, building campsites, picnic shelters, barbecue pits and a caretaker’s residence. A Golf Course and an airfield were even roughed out from the rocky terrain of Lookout Mountain. Most structures were built out of native sandstone and timbers and can still be seen today.

A grand ceremony was planned for the dedication of the park on May 24, 1939. It is reported by the Dekalb County Times that nearly 4,000 people came to the opening, which at the time was the largest crowd ever assembled in Dekalb County. Two motorcades traveled the highway towards the park that the ‘CCC boys’ had built, some local high school bands played for the crowd and speeches were given by the local and state representatives. An air group from Chattanooga, TN also flew in 15 planes and preformed an ‘aerial circus’; and also offered to take passengers on rides to view the park from the air.

The CCC enrollees led inspection tours for the dedication guests so they could see first-hand all of the monumental work that had been done to build DeSoto State Park and other community projects.

The men of Company 472 were congratulated on their fine work and praised for giving Dekalb County ‘reasons to be proud of DeSoto Park’.

There was a second CCC company that worked in DeSoto State Park. On September 10, 1941 Company  2436 transferred to Fort Payne, to establish Camp SP-19 at DeSoto State Park. Their first job was constructing their own camp, while at the same time dismantling Camp SP-5, formerly occupied by Company 472 and abandoned since March of 1941. According to a Camp Inspection Report dated October 27, 1941, Company 2436 had company strength of 169 men. At the time of the October inspection, they had surveyed the right-of-way for the DeSoto Parkway, between the park and May’s Gulf, constructed telephone lines between SP-19 and the park, and constructed a storehouse. Work projects that were in progress in DeSoto State Park at the time consisted of constructing a playground area, an aviation landing field, straightening Rock Creek Bridge, realigning and cherting the roads in the park, constructing a park road to the county road, constructing foot bridges, sodding road banks, constructing cabin furniture, and constructing the road to May’s Gulf. (Little River Canyon) Company 2436 worked at DeSoto State Park for approximately four months, leaving on January 16, 1942

‘The CCC is Disbanded’

Despite the popular support for the CCC, the agency was never permanent. The program depended on emergency and temporary support from Congress.  After Pearl Harbor was attacked on December 7th, 1941, all federal programs were revised to emphasize the immediate needs of the military, and with war-time jobs being more readily available, enrollment declined. The United States Congress then voted to disband the CCC formally on June 30, 1942.

During the Civilian Conservation Corps nine year existence, the program was responsible for educating hundreds of thousands of uneducated men, who, in turn, created hundreds of parks and recreation areas all over the United States, as well as halted the erosion of millions of acres of land.

Many people contribute the opinion that the CCC ultimately gave men and their families fuller and richer lives, provided useful skills for later in life, and for many enrollees, prepared them for military life during World War II.

Legends on the Lookout